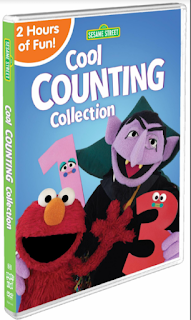 Los Angeles – On Sesame Street, you can count on your friends … and count with them, too! Sesame Street: Cool Counting Collection will be available on DVD and digital download on June 8, 2021 from Shout Kids and Sesame Workshop. Join Elmo, Abby, Cookie Monster, and more as they sing, play, and laugh their way from 1 to 20. Learning numbers has never been more fun—or more furry!
Animations, songs, and favorite moments from recent seasons make counting as easy as, well, 1-2-3! Celebrity friends help the little ones practice their numbers, too: Elvis Costello wants to count to 10, but he’s missing an important number; Feist sings about her favorite number 4; and Liam Neeson gets an acting lesson from Count von Count while they count to 20.
The DVD is packed with over two hours of fun and comes complete with bonus features, including quintessential counting segments from Elmo’s World and Abby’s Flying Fairy School. Also included with the DVD is a Count with Elmo! mini-book for young fans.
Bonus Features:
·        Street Story: Numeric-Con
·        Street Story: Elmo and Zoe’s Hat Contest
·        Abby’s Flying Fairy School: Sheepytime
·        Elmo’s World: Counting
Currently in its 51st season, Sesame Street is the country’s longest-running children’s television program and has received more Emmy® Awards than any other show in television history.
WATCH THE TRAILER HERE:
My 5 year old loves Sesame Street so he was thrilled to get this in the mail. He's watched it almost every day since and he said "I was so happy that it had special features." It not only allowed him to build on his counting skills but also gave mom a little break during the day. He does not watch TV or moving normally, so it was nice to find something educational that he really enjoyed!!!
WIN IT: One reader will win a copy of this DVD
HOW TO ENTER: a Rafflecopter giveaway