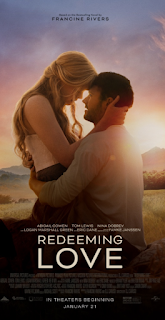 Based on the bestselling novel by Francine Rivers, REDEEMING LOVE is a powerful story of relentless love and perseverance as a young couple’s relationship clashes with the harsh realities of the California Gold Rush of 1850.
Angel expects only pain from those around her. Sold into prostitution as a child, Angel survives with hatred towards herself and the men that use her. She meets Michael Hosea, a farmer who believes God wants Angel to be his wife. Dire circumstances force Angel to accept his proposal, but when Michael defies her bitter expectations, her wounded heart begins to mend.
As Angel encounters a love unlike anything she ever experienced, feelings of unworthiness and shame cause her to run from a life she doesn’t think she deserves. As Michael sets out to find her, Angel discovers there is no brokenness that love can’t heal.
Coming to theaters January 21, 2022, REDEEMING LOVE  shows there is no brokenness that love can’t heal.

ABOUT THE BOOK:An international sensation, the beloved REDEEMING LOVE  book continues to be one of the industry’s top-selling titles year after year. This remarkable novel has sold millions of copies and is among the top twenty on the ECPA fiction bestsellers list for four years running.

I read this book years ago and it was the book that first introduced me to Francine Rivers, and I've read many of her books since then. You could say I'm a fan!  For those of you unfamiliar with the story, to sum up the novel, it's about a man who is called to love a woman with a troubled past. She denies him time and again, but he continues to hold on to hope.  As I mentioned it's been years since I read this book, so I don't recall all the specifics of the novel and how "graphic" it was, but this is a movie that has some adult themes including sexual and physical abuse as well as some very intimate adult moments on set, but has the underlying message of redemption. This is not what I would consider a "family film" or a "Christian" film, but a book based on a novel by a Christian author. While there are references to prayer and God, it's a very grown up storyline. I would recommend the movie, but caution those with children to screen it first. It has a PG-13 rating, but some material may be inappropriate for children around age 13, in my opinion.

Many thanks to Momentum for a chance to screen this movie early! #RedeemingLoveMovieMIN AND #RLGirlsNightOutGiveaway